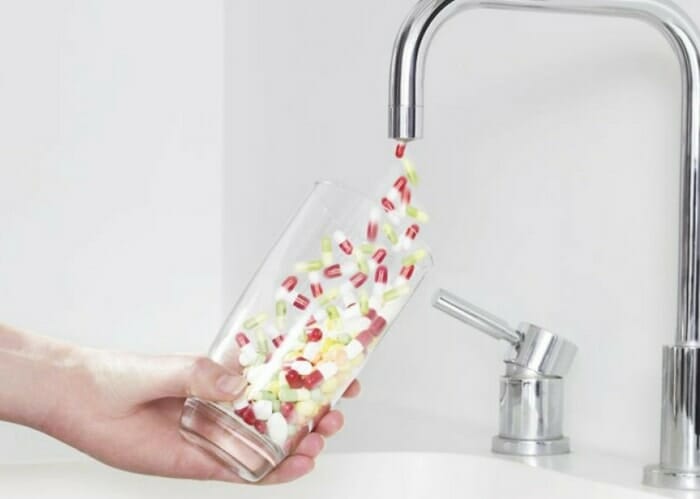 More than half of Americans regularly take prescription medication. Of those who take a prescription, most take four different medications a day. And these numbers are rising steeply: in 1997, Americans filled 2.4 billion prescriptions. In 2016, the number increased to a whopping 4.5 billion.

While modern drug therapies play an important role in overall health, and these medications save lives every day, there are also problematic side effects for the individual and the environment. After a person has used their medication and it's passed through their body, those pharmaceuticals go into our sewage and waste water, where they end up in the environment, and often in our drinking water.

What Are Pharmaceuticals In Drinking Water?

Drugs and their metabolites (substances formed as the body metabolizes a drug) enter our water supply in several ways:

These are bioactive chemicals, designed to have pharmacological effects on a person, but have unintended effects in the environment and drinking water supply. Pharmaceuticals are controlled substances, after all, and not intended to be consumed by anyone other than a person with a demonstrated medical need.

The broad term “pharmaceuticals” also includes over the counter and personal care chemicals, ranging from vitamins and painkillers, to active ingredients in shampoos and cosmetics.

While these drugs have all be found in tap water, they are only present in trace amounts and at safe levels. However, the fact that these drugs are present at all is a cause for some concern, when you consider that they may be unintentionally taken by those for whom the drug poses a health risk, such as those with existing liver or bone marrow disorders, or by pregnant women.

What Are The Risks Of Pharmaceuticals In Drinking Water?

The World Heath Organization has assessed drinking water in the UK, Australia, and the United States, and determined that the concentrations of pharmaceuticals in drinking water are below the level of dosage that would have a negative effect, and that adverse health effects in humans are “extremely unlikely”

However, human health risk from direct consumption of tap water is not the only risk from these high levels of pharmaceuticals. For example, according to the National Center for Biotechnology Information, there are a number of additional effects, including:

Furthermore, this is a problem that will only get worse over time, as the levels of available fresh water decrease, and prescription medication usage continues to increase.

Video: Do You Really Know What's in Your Water?

How Do We Reduce Pharmaceuticals In Our Drinking Water?

The biggest determinant of how much and what kind of pharmaceuticals end up in our drinking water is what kind of filtration methods are being used by the government or utilities that supply the water. Advanced countries usually employ several methods for treating and filtering water for human consumption, including:

But not all countries have the facilities to treat their drinking water with these methods, and, unfortunately, even with all these treatments, some compounds remain unaffected.

More work needs to be done by governments and regulators. However, there are several steps that consumers can take to prevent pharmaceuticals from getting into the water supply in the first place:

Following these steps will reduce the number of pharmaceuticals available in our waste water, protecting human health and the environment.

How Can I Remove Pharmaceuticals in Drinking Water?

Reverse Osmosis filters can remove up to 99% of pharmaceuticals found in your drinking water. They make use of a membrane which removes the contaminants in the water.

I'm Lisa and we founded this website to help you find the latest info and products related to water filters. As a mother of two beautiful kids, my husband and I wanted to make sure we promote a healthy lifestyle and ensure a clean water supply. I have no doubt you want the same for your family. Our team will review various products and offer you guides to help you make your decision easier.